Fashion Shows: A Necessity or a Desire?

Fashion Shows: A Necessity or a Desire?

Do We Actually Need Fashion Shows?

Fashion by nature exists in an ephemeral state; trends come and go as style matures then dies. The fashion show is the most popular form of public communication between producer and consumer of fashion. Whether we watch a show live, online or through pictorial records there is a dialog being developed in an attempt to understand the world we live in and current affairs.

Presently the fashion show has become a circus of celebrities, paparazzi, bloggers, buyers, editors and a slew of fans trying to break the barriers. The fashion world is now such a spectacle and such an overwhelming production that the clothes have almost become second thought. The culture of the fashion world is now a voyeuristic obsession and it all starts with a show. 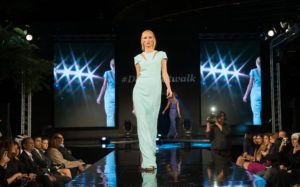 The importance of the fashion show is a critical point in the whole process of selling fashion and all that fashion implies but it has not always been part of the business. The history of the fashion show is not a common story, as the show is not meant to be of permanence. A few months later there is another production that requires our attention, leaving yesterdays show behind somewhere in the attic of our consciousness.

The birth of the fashion show can be dated to 1943 according to Valerie Steele, chief curator and director of the Museum at the Fashion Institute of Technology. The intention was to encourage a presence for American fashion, which was always overshadowed by French fashion. For decades the French were the dictators of fashion that then trickled down to the American industry. It was the elite upper class that was the pioneers for new fashions and styles and in an attempt to be part of the fantasy. The working class would imitate their fashions as much as money and working environments would allow.

In the 1900’s America was experiencing the rise of consumer culture. There was a sense of purpose in purchasing power. The new rich wanted their surroundings to reflect the fact. The development and growth of department stores gave consumers a one- stop shop for all wants. Fashion naturally was a major component of the time. The way fashion was advertised became very important to the success of the fast growing industry stateside. The new dictators of fashion were now executive buyers for these department stores along with editors of important publications.

In 1943 Eleanor Lambert, an exceedingly influential fashion publicist, organized an event called “Press Week”. This was a favorable push to give American designers the attention they needed as they were making strides in attempt to 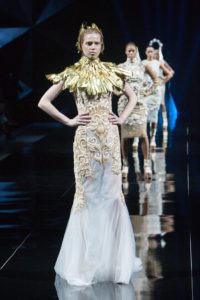 sever such strong ties to French fashion. This event gave editors, buyers and writers a chance to see new offerings for the season all in a convenient time frame. The shows became more elaborate over the years in search for more publicity. Designers began to show in clubs, restaurants, lofts, etc.

Soon enough the Council of Fashion Designers of America realized that these designers needed an effective and reliable space for a better presentation. Olympus fashion week was born, in New York held in Bryant Park. They also developed an official fashion calendar for a well-organized Fashion Week. “Fashion Week – like Press Week before it – helped American designers reach a more international audience, as it allowed editors, writer, and buyers from abroad to see the country’s best work at a single time, in a single place.”

Today the fashion show captivates seasonally and across the globe. The four major “fashion capitals” with their own fashion weeks are Paris, London, Milan and New York, with a developing presence in Los Angeles. With fashion week organizers presently trying to lessen the chaos of fashion week by cutting guest lists, today is an interesting curious time for the fashion world. But as always, the show must go on.

“Made In America” What does it mean?