Is Your Business Idea Ready to Go?

Is Your Business Idea Ready to Go?

We at Indie Source are thrilled to have Jacob Eberhart lending his knowledge to us for a post.  Jacob is the co-owner and VP of operations at Pretty Knotty and knows a little something about running a business in the fashion industry. Whether you are starting your first fashion line or are considering embarking on a new business idea, we hope you find his tips on getting your brand going useful and inspiring.

Getting your business idea ready for launch

A few months ago I was at an event for local entrepreneurs.  We noshed on wings and talked about what we were doing, wanted to do, and had done. As a seasoned veteran of sorts, I noticed a common theme among those who wanted to create their own business; they were presenting half-baked ideas.

My wife loves to watch baking challenge shows on TV and these baking shows are immensely critical if their contestants produce a soggy treat.  It is clear when you bite into a soggy cookie that it needs more time in the oven. It’s also clear when your idea isn’t ready to go.  And just as some folks like soggy cookies, myself included, some folks look for half-baked ideas.

Let’s be clear, if someone likes your half-baked idea, you don’t want them involved. There’s a difference between being in the know organically, and forcing yourself to be in the know.  Avoid people who force themselves into the know; they connect with everyone that mentions startup buzzwords, with the hope that one of them will have a million-dollar idea.

If someone likes your half-baked idea, there’s a good chance that their follow-through will be half-baked. Not to mention their valuation of your idea, the connections they would offer, and the equity you think you deserve.  You deserve a fully-cooked partner with your fully-cooked idea.

Also, just as some bakers don’t know that their cookies need a few more minutes in the oven, it can be difficult for an entrepreneur to find out that their idea needs more time.  And just like baking challenges, it’s best to find out your idea needs help informally, instead of in front of professionals that will shred you like a piece of fresh mozzarella.

First of all, Einstein has said, “If you can’t explain it to a six-year-old, you don’t understand it yourself.” A friend of my sister-in-law described their job as, “I help electronic products to see”.  While this is a simple analogy for a complicated process, even a 5-year-old could understand the basis of her job duties.

In contrast, someone who does, “design facilitation sessions specifically catered to associations”, is an explanation that makes no sense for the uninitiated, regardless of age.

How do you keep it simple? Let’s take a hypothetical example. You realize Anytown, USA pays more for paper than they should and they only buy from small businesses.  You want to sell them paper at a low price, as a small business.

When someone asks for an explanation of your business, what do you say? If you want Anytown to avoid you like the plague, say, “We are reducing the Unit Cost-per-SKU of ANSI A and ANSI B reams for the municipality of Anytown and close minor civic divisions as a small business”.  However, if you want people to invite you back, say “Anytown buys paper from expensive small business vendors, but we want to change that”. If you’re unable to get close to this, you’re not ready.

Let’s try it out

I want to sell paper to Anytown at a low price.

But, Office Max and Amazon sell paper cheaply. Anytown could buy paper from them. Plus, there’s no way you could beat their prices.

Other small companies sell paper to Anytown, why would they buy from you?

Those companies charge too much for the same product, so we save Anytown money on their paper.

Be realistic in your niche

Let’s be realistic, you’re not going to beat Geek Squad at their game.  Geek Squad is an enormous group of talented technicians with backing from the immense footprint and buying power of Best Buy.  Geek Squad’s game is scale, brand, and price, realistically there is no way that a startup can beat them on any of those metrics.  They are omnipresent, highly established, and can afford to undercut the competition until they’re the last brand standing. However, you can beat Geek Squad in other ways.

Best Buy cannot afford to be highly agile, have a varied list of Geek Squad services, or invest time and resources to enter the Kafke-esque market of government IT consulting or similarly regulated industries.  A small company could easily adapt to new products and services in the market, offer a long list of said products and services, and take the investment of time to sell to government clients or other highly regulated markets.  The 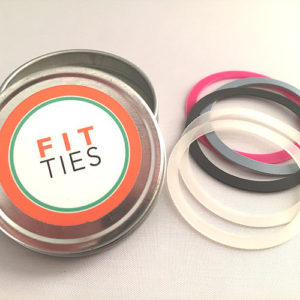 market is more segmented than you think.

To give you an example that’s close to me, Shelly Nicholas and I started Pretty Knotty Hair Ties.  Yes, there are a ton of hair tie companies. The hair tie industry is highly established and segmented. However, we are specifically a no-pull hair tie for female athletes, something that is unique in the vast hair tie market.

When seeking advice, make sure that you are humble and succinct.  I made the mistake of using hubris and ambiguity while talking to an industry leader. And from that, I burned a bridge that I sorely needed.

Mentors do not need to be senior to you, or even in your industry.  While I will talk about the “make it an app” crowd later, many inventors in digital markets have gone through the same trials and tribulations that you have.  Although it may seem puzzling, many individuals who have found success early on can provide a great resource to those who are starting later on in life. Other entrepreneurs may be able to easily solve the obstacles that seem insurmountable to you, and vice-versa. Simply said, two heads are better than one.

Avoid the “make it an app” route

Apps seem like a tree that prints money.  Advisors, friend and family alike will tout, “make it an app” as the quickest path to success.  This is simply not true. Yes, there are Zyngas who make Angry Birds into a multimedia franchise and turned Words with Friends from an old idea to a hip game, and Instagram which made affiliate marketing into an industry.

Behind all of these successful apps are millions of apps just gathering dust in the Apple and Google Play stores.  You can throw a rock and hit 100 app developers. Go on Linkedin and find 1000, and do a google search and find 10,000. Can 10,000 app developers be wrong?

The road to app obscurity is paved with great ideas.  Google Play and the Apple store are for the most part an app graveyard with a handful of apps that actually sell.  Apps aren’t necessarily bad, it’s the idea that apps are the first and only path to a product that’s bad. Think of your idea as an idea, before you pigeonhole it into an app.

Hillel was asked to summarize the Torah while standing on one leg.  If I was to summarize “Is your idea ready” while standing on one leg I would say, “listen to others who have successful ideas and fit your ideas into their path”.  Not everyone takes the same path to a successful product, but many people will take a similar path to success. “Only fools rush in”, is an adept saying in life, and especially in entrepreneurship.

Henry Ford designed the Model T more than 30 years after the first production car was made.

The Model T is widely considered the first mass-produced car, as well as becoming one of the best selling cars of all time. The turbocharger designed by Alfred Büchi in 1905 took 70 years before it was developed enough for widespread use in production cars, and now more than 100 years after it had been invented, it’s considered a necessity for fuel economy and performance.

Musical artists frequently make covers or remixes of existing songs, oftentimes touted as better than the original. Did you know Dolly Parton sang “I Will Always Love You”? I didn’t. Whitney Houston made the song her own. Listen to The Nylons’ cover of “Poison Ivy” and you’ll forget The Coasters wrote it. I heard Strung Out’s version of “Bark at the Moon” before I heard Ozzy’s original. Honestly, I prefer the former. I am still undecided if Toto or Weezer sing “Africa” better.

In short, waiting until your idea is ready will not destroy your ability to innovate.  Now go out there and bake yourself a winning idea.

How to Conduct a Competitor Analysis & Build Your Competitive Matrix

Start Collaborating Today
Do NOT follow this link or you will be banned from the site!
Fill the form below: